A GROUP PHOTOGRAPH - Before, Now & In-Between

Win a copy of my new book ‘I Shall Not Be Away Long’ by sending in the number of miles of trenches that you think are on this map: 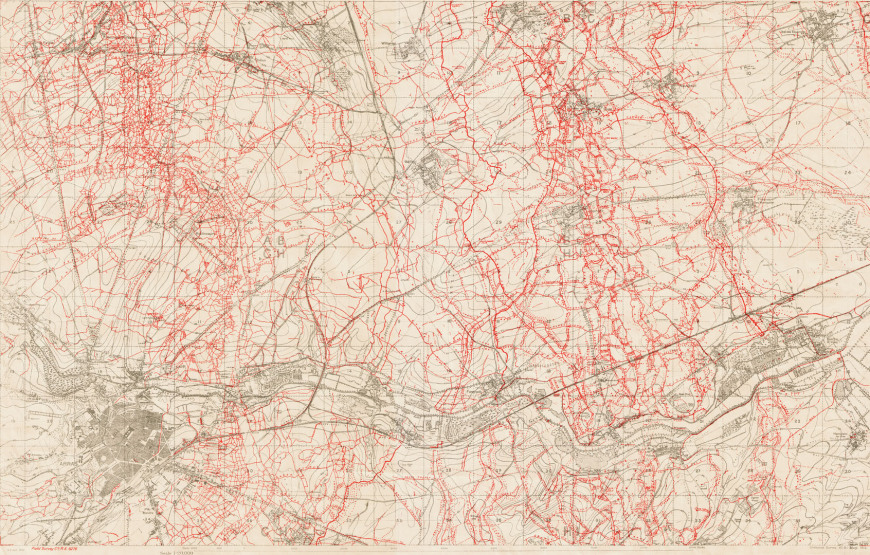 Information about this map

The map shows Arras in the bottom left corner and the present day Vimy Memorial is just off the top.

To see more detail, click on the map to open a bigger version in a new tab.

The date of the map is 14th May 1918, so trenches had existed here for over 3 years and 7 months (the French had held off the Germans during the 1st Battle of Arras from 1st to 4th October 1914).

This is one of those strange maps where the trenches of both sides are marked in red, but then it is an area where the same trenches had been occupied by the different sides at different times. In the early part of the war the front lines were on the left side of the map and after the battles of 1917 they were towards the right.

I have digitised the whole map (it took 11 days) and used Adobe Illustrator to measure the length of the digitised lines and by applying the scale came up with a final total number of miles.

I have included the continuous red lines of current trenches as well as the single-dotted lines of disused trenches, but not the ticked lines of narrow gauge railways nor the double-dotted lines of tracks (see http://www.greatwar.co.uk/research/maps/british-army-ww1-trench-maps.htm for a full key).

As accurately as I have digitised the map, the number I ended up with is likely to be considerably less than the real length of trenches in this area. Firstly, the full extent of disused and destroyed trenches is not shown, and secondly, at this scale not all the detail of the zig-zagging or toothed layout of the frontlines is shown (and from comparing maps with aerial photographs I've found that if a trench was zigzagged or toothed, the reality could be 30% to 60% longer than the straight line shown on a map).

Whatever, I have come up with a number of miles of trenches from this map, and that is what you are aiming for!

This competition has closed.

Further details will be added at a later date.